Let’s be honest, there is always going to be something we don’t like about our friends and family.  No one is perfect and we all have flaws, but what I’m interested in is how we love people despite their imperfections.  I know it must be possible because I’ve felt it; I’ve experienced genuine love from people who knew my flaws and failures. Sometimes it seems like this is a result of ignoring or overlooking these seemingly small issues and choosing to see only the good in people.  Other times it can be accomplished by choosing to see flaws as quirks or alternative life choices instead of deep moral failings.  That’s not what I’m talking about, though, because people can tell the difference.  People know when there’s a silent “but” at the end of your “I love you.”

I think a key component is realizing that you can’t really love someone if you are overlooking their flaws.  Turning a blind eye to something potentially harmful isn’t love and neither is harboring anger and judgement and simply avoiding the topic.  Don’t get me wrong though, I’m not saying to just modify your feelings, thoughts, beliefs etc. in order to make space for other people’s hangups.  This is where the difficulty lies; as with most things, I think the key is hidden somewhere between the two extremes in some mythical middle ground.

While I wanted to discuss this in a more generic way without relating it back to LGBT stuff, I think it’s important to note that in many cases, the “agree to disagree” approach just isn’t sufficient.  When the topic is something external and relatively innocuous, this may work, but when talking about something as personal and emotion-laden as a person’s sexual or gender identity, a key aspect of who they are as a person which touches nearly every aspect of their past, present, and future, simply agreeing to disagree often times just won’t cut it.  I think they key to this conundrum might lie in our definition of love which my pastor always describes as “willing the other person’s good.”  If you are truly and honestly seeking the best that God has for your friend or family member, you should be able to convey your disagreement in a way that doesn’t make them feel attacked, ashamed, rejected, or insufficient.  You should be able to make it clear that this minor point of contention is nothing when compared with the overwhelming affection you feel towards them.

As I mentioned in a previous post, this has been a tough piece to write, primarily because the questions it asks are at the heart of the conflict that has raged within me for the last few years: the place where my desire to love like Jesus meets my futile attempts at living as a righteous child of God.  Matthew 5 concludes with the impossible directive to “Be perfect, therefore, as your heavenly Father is perfect” and that is a command I have tried to take very seriously in my life despite the fact that I’ve never been anywhere near achieving it.  However, I think it is also important to note what is said just before this, a reminder that “He causes His sun to rise on the evil and the good, and sends rain on the righteous and the unrighteous.” That’s God’s way of showing His love for us: no matter how badly we’re failing at living up to His standards, He set a flaming orb in the sky to give us heat, and life and light and He causes droplets of moisture to condense in the air and fall down on us to our delight and dismay. Wherever we are on that continuum from perverse to perfect, we all experience the same rain and the same sun. 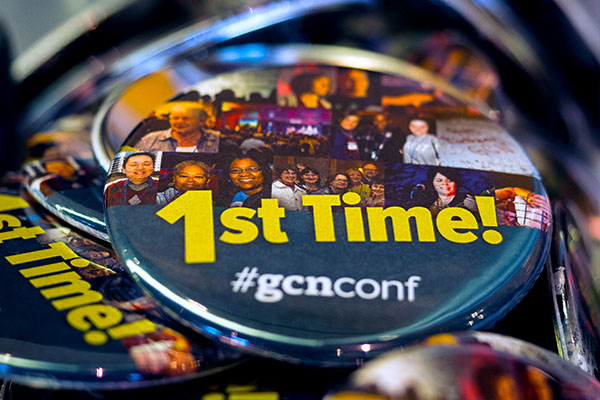 As you may or may not know, this past weekend I attended my first Gay Christian Network conference.  I didn’t really know what to expect or what I really hoped to get out of it, but luckily, God knew.¹  I went to the conference for two main reasons: I didn’t really have any gay Christian friends with whom I could relate and also because I decided it was about time I get out of my safe, comfortable bubble and stop waiting for life to happen to me.  I had no idea what success or fulfillment would look like for me, but I said to hell with it and booked the trip.  In the interest of making a long story short, I’m going to skip over descriptions of the conference itself and just talk about the impact it had on me and how I hope to move forward, but if you would like to hear more about my specific experiences, hit me up and we can chat.

So, the first and most important thing I got out of the conference was a great group of caring friends.  I don’t think I’ve ever felt such a strong bond with a group of people as quickly as I did with those I met this weekend.  Everyone was so friendly that despite my (sometimes extreme) introversion, I was almost never alone.  I felt drawn in and accepted in ways that I’ve never experienced before and not just in a “you look lonely, come hang with us” kind of way, but in ways that made me feel truly wanted and the best part is, it didn’t end with the conference.  I’ve kept in almost constant communication with my new friends since we left each other and I get the feeling that it’s going to continue.  In many ways, this is an extension of my discovery of gay Christian bloggers a few years back.  At that time, I realized I wasn’t the only person who was gay and Christian and doing my best to live faithfully to the live God called me to.  Now, I am able to truly interact with others instead of  having to satisfy myself with one way communication.

The second important takeaway from the conference was receiving important suggestions on how to relieve some of the tensions between my parents and I as well as  how to help my church be more welcoming of LGBT folks.  My hopes of ever seeing eye to eye with my parents hit an all time low this weekend, but that only inspired me to search for answers and I believe I may have found some thanks to a wonderful woman named Ruth and her free mom hugs.  The first thing I learned is that I need to give my parents at least as much grace as I’m hoping to receive; after all, I’ve had 18 years to process this and they’ve had less than two.  I think another important step will be to finish another post I’m working on called, “I Love You But…” in which I’m contemplating how to truly love people with whom we fundamentally disagree.  It’s one of the toughest topics I’ve addressed here which is why I still haven’t posted it; there’s so much to think through and unravel so it’s taking some time.  However, I think it will also help me with bringing this topic to my church.  If I’m able to come to some good conclusions, it will be a great asset in finding a way forward in being more welcoming in a place where our theology doesn’t allow us to be fully affirming.  I also received a lot of great ideas from a workshop on this topic led by Eve Tushnet² and I’m really excited to try to make use of some of those strategies.

My last big takeaway is a little more nebulous, but it has to do with social justice and privilege.  Privilege has always been a difficult topic for me because, while I am aware (though definitely not aware enough) of how much privilege I have as a white, cis-gender, able-bodied, male, I never knew what to do with that.  It felt like it was a guilty weight around my neck that I never asked for and couldn’t give up even if I wanted to (though if it ever came down to it, I doubt I would have the courage to do so).  But in the final keynote of the weekend, Justin Lee made it so much clearer by comparing our privilege to the parable of the talents: it’s something to be used and invested, in this case, primarily, as a way of benefiting those who weren’t born with the same privilege.  This is a completely new concept for me and, while I’m still not sure what to do with it yet, I can at least wrap my head around it much better.  Along with that, Allyson Robinson had some amazing words to say about laying down our arms in the LGBT culture war and making sure we use our increasingly dominant position in our culture not to oppress others, but to bring reconciliation and grace.  It was fantastic to hear a leader in the LGBT community conveying that message in such a powerful way.

So, all that to say, it was an amazing weekend and I can’t wait to go back to GCNconf in Pittsburgh in 2017.  I’d love to bring friends or family along with me next year and straight allies are always welcome so if you have any interest in attending, let me know.

¹I usually hate phrases like this as they’re pretty cheesy and often times attribute things to God that are questionable at best, but the words just kind of came out and as I looked at that sentence and considered deleting it, I teared up a little bit and knew it was true.

²I’m not gonna lie, I definitely had a bit of a fanboy moment getting to have dinner with her and talk about Marilynne Robinson even though Eve did call me a bad reader : p