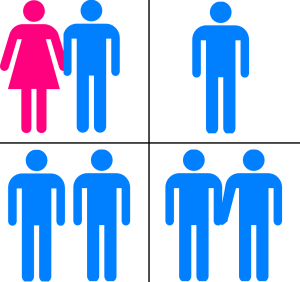 My last post was a little on the heavy side so I thought I might do something a little lighter and more fun this time around (well, that’s the goal anyway, it may not have ended up that way.  Oops).  I started this a while back, but never got around to finishing it until now.  So without further adieu, here’s a post on how Christians view various categories of gay people in the church.

While the conservative Christian Church can sometimes be pretty anti-gay, there are still various levels of respectability within the umbrella term of “gay.”  I’m attempting to separate out the various groups and organize them by how acceptable they are to those who hold  a traditional sexual ethic.  I don’t think I really have a point to make here, I just thought it would be an interesting exercise.  So here’s my list ranking from the most accepted to the least:

This group consists of those who were once gay, but no longer identify that way, usually as a result of conversion therapy.  Most in this group spent at least some time engaging in same-sex activity at some level, but eventually turned to Christ and, with hard work and prayer, have come to a place where they no longer consider themselves gay.  For some, this means they report no longer being attracted to the same sex and sometimes even express feelings of attraction to people of the opposite gender.  For many, it simply means that they have maintained what they believe to be a sufficient level of sexual purity to allow them to forgo the use of the term gay.

This refers to those who, for various reasons, don’t use (and often never have used) the word gay to describe themselves and instead, employ the term same-sex attracted.  This can mean that they believe the word gay is inextricably tied to being sexually active or simply that the word makes them uncomfortable or doesn’t fit with their image of themselves.  Many conservative Christians applaud those who eschew the term gay because, to many, it expresses an acceptance of ones attractions and an unwillingness to change them.

For those who are unfamiliar with the term, a mixed-orientation marriage (MOM) refers to a heterosexual marriage where one spouse is straight and the other is primarily or exclusively attracted to his or her own gender.  I, personally, have a huge amount of respect for those in mixed-orientation marriages as it adds a massively disruptive component to the already complicated sacrament of marriage and shows incredible dedication to living out one’s Christian values.  The reason I believe this is viewed as less acceptable than people who identify as as SSA is due to the fact that those in MOMs typically self-identify as gay and aren’t necessarily working towards changing that aspect of themselves which, as previously mentioned, is something traditionalists often disapprove of.

Like the previous group, single celibate gays often receive disapproval because they self-identify as gay rather than SSA.  Again, this is often seen as a way of accepting a gay identity which many believe should be overcome through prayer and therapy.  People in MOMs are seen as making strides towards heterosexuality through their marriage, however, celibate gays, though often committed to life long celibacy which can lead to difficult bouts of loneliness, are sometimes viewed as complacent in their attempts at living a holy life.

It takes at least a moderate if not progressive theology for someone to be accepting of any type of romantic gay relationship even if those involved refrain from sex.  I imagine that many Christians are skeptical that two people who are, presumably, sexually attracted to each other, can engage in a long term romantic relationship without consummating said relationship (which, really, should be between that couple and God, but I digress).  However, whether they believe claims of celibacy or not, the mere fact that a romantic relationship exists is viewed by many as a rejection of the Bible’s condemnation of ἀρσενοκοῖται (arsenokoitai, translated in some version of the Bible as “homosexuals” and in others as “men who defile themselves with men”).  The belief that those in this type of relationship are ignoring God’s law in favor of satisfying their own desire for companionship can lead those on the more conservative end of the spectrum to express feelings of antipathy towards those in this group.

Finally, those who are in consummated same sex marriages are typically the least accepted group of gays in the Church.  Many who have dug deeply into scripture and studied the language as well as the cultural context still interpret passages such as 1 Timothy 1:10 or 1 Corinthians 6:9 as condemning all sexual activity between two people of the same gender even in the confines of marriage.  As a result, there is often widespread disapproval of such couples in conservative churches which results in a distinct feeling of unwelcomeness and discomfort when they visit such a church looking for a spiritual home.

My hope is that wherever an LGB person falls on this list, they will be fully loved and supported in the Church.  When I say support, I’m not necessarily asking you to adjust your theology regarding LGBT Christians and how they live their lives, but merely suggesting that we can still worship alongside, love, and be a family to people with whom we don’t necessarily see eye to eye.  Remember, sexual identity and it’s Biblical implications is a hot button issue right now and is therefore a subject where it’s easy to identify disagreement.  For every Christian you know, there is probably at least one topic on which you and that person passionately disagree.  Don’t let this subject be one that divides and weakens the Bride of Christ.  Love each other in and through our disagreements.  And while the idea of “love the sinner, hate the sin” makes sense in principle, the rampant misuse of it has led to severe harm and a widespread call to retire it (for more info on that, see Beth Woolsey’s post here).  As always, your thoughts and comments are welcome.